The house was built in the second half of the 19th century by a local tea merchant. At that time, old settlements usually consisted of crooked and narrow streets, along which windowless houses were built, surrounded by adobe walls. The architecture of the dwelling of the Uzbeks was of a single type. It was a closed architectural complex, bounded by blank walls from the street and neighboring estates. All residential and outbuildings with windows and doors faced the courtyard. In wealthier families (as in this one where the merchant lived), the premises in the house were divided into two parts (img 1) - ichkari (internal), for children and women, and tashkari (external), a more beautiful and richly furnished part for guests. 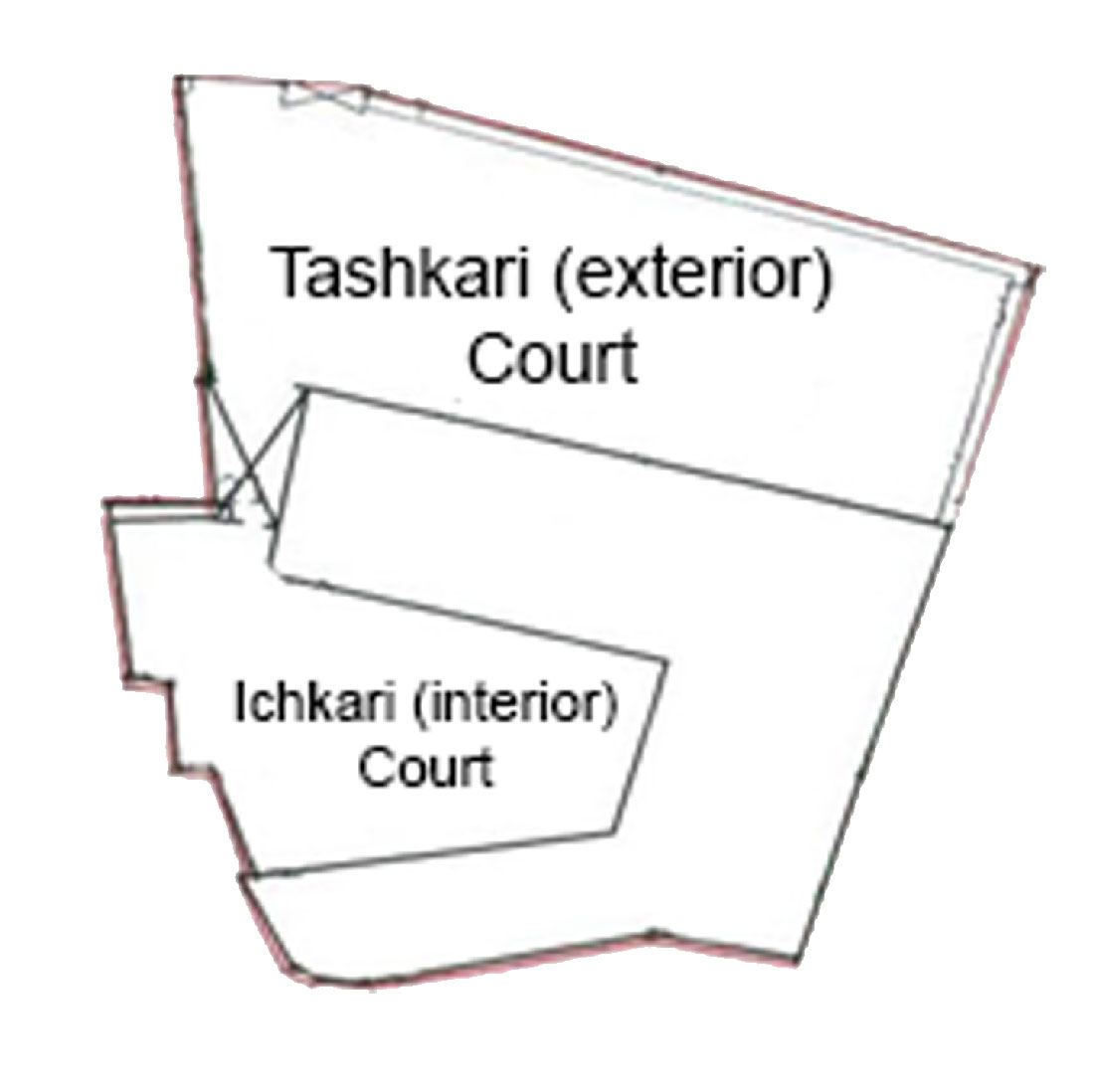 Img 1. The plan of the hotel "Jahongir" 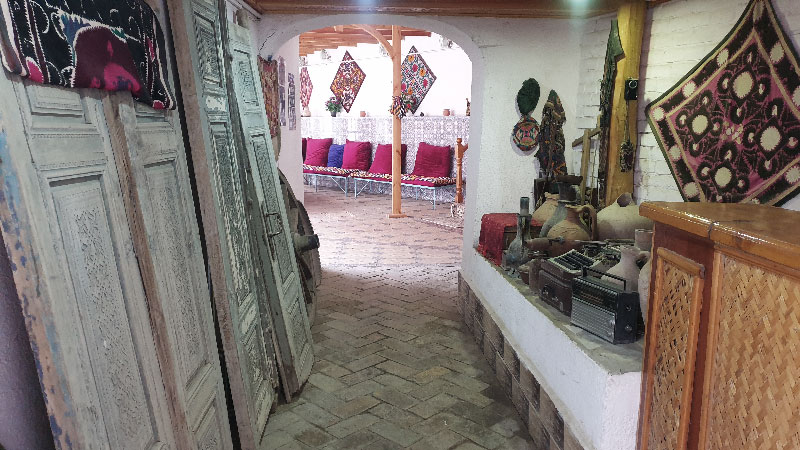 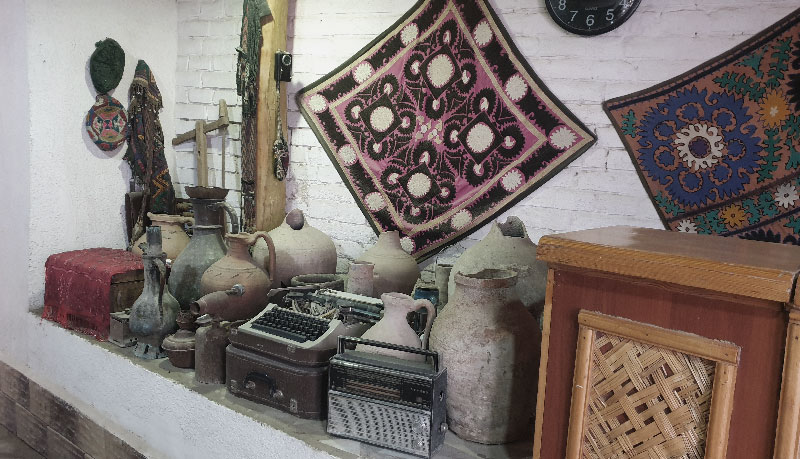 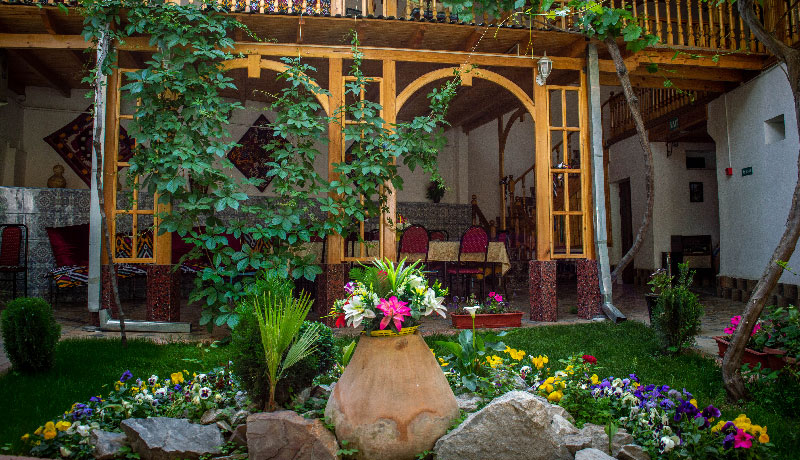 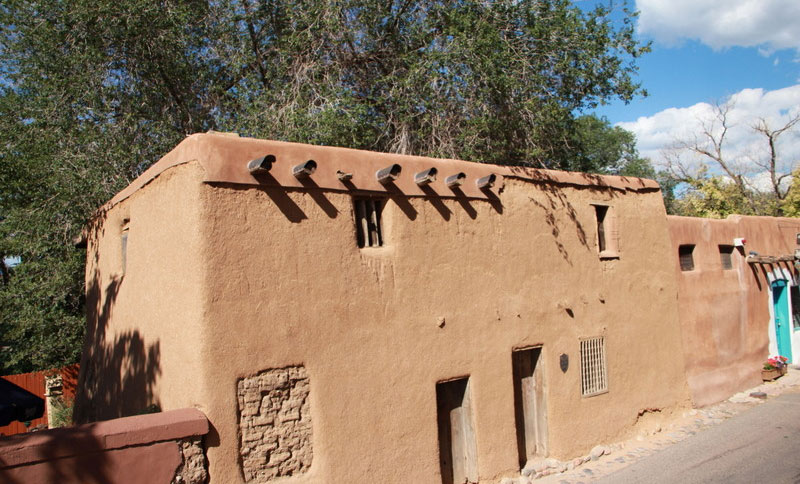 Adobe House made of Clay

From time immemorial, the main building materials were clay (pakhsa), brick (raw or burnt), round or oval clay rolls (guvala), wood (mainly poplar and willow), for plaster - clay and straw. In the past, mainly madrasahs and mosques, baths and palaces, houses for wealthy people and officials were built from baked bricks. The walls on the ground floor in this house are also made of baked bricks. At the beginning of the last century, houses were built without a foundation, only in some places stones or burnt bricks were used for the foundation, here they also used burnt bricks for the foundation. 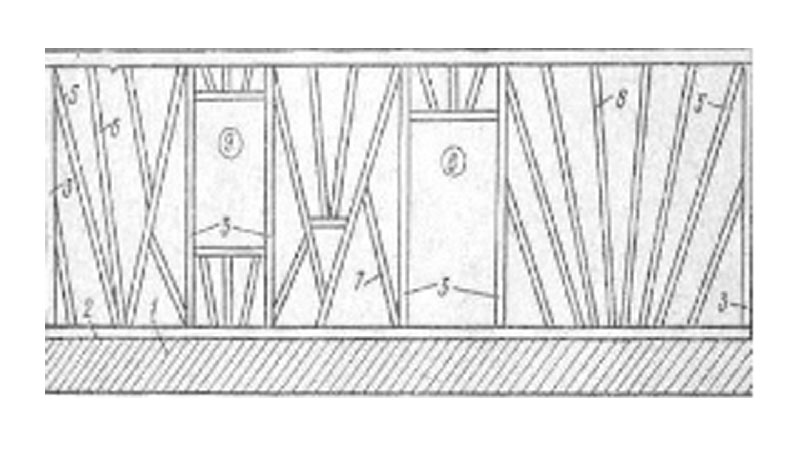 The second floor is made using the "sinch devor" (Img 2. 1-Foundation, 2-Insulation (wood), 3-Racks, 4,5,6,7-Frame elements, 8- Door opening, 9-Window opening) technology with double frame walls. The construction of frame walls was prompted by the need to insure against earthquakes. Therefore, the saying has developed: "Sinch devor - tinch devor" ("frame wall - calm wall"). The frame was filled with raw masonry (img 3). There is an empty space between the frame walls which provides the insulation function. Therefore, in such houses it is always cool in summer and warm in winter. 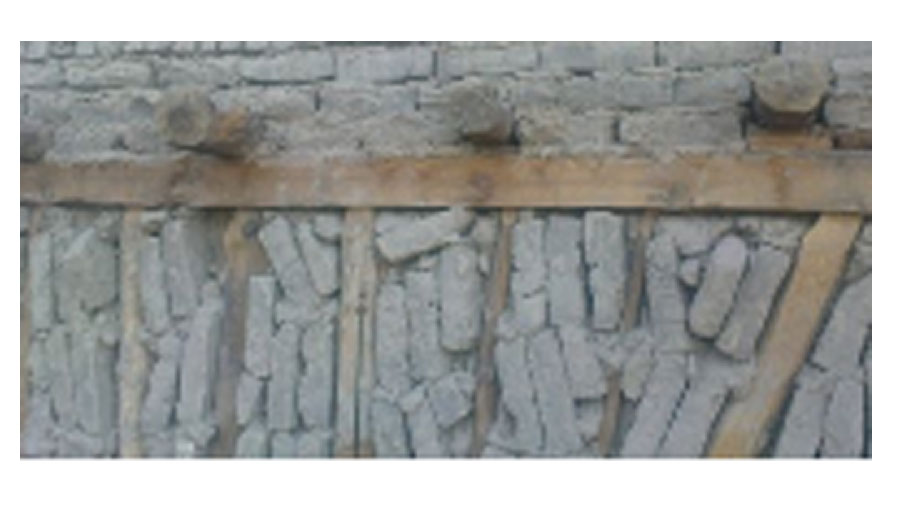 External view of the frame wall

The layout of the house

The layout of this house is typical of that time, i.e. combination of a room with an iwan located at right angles to them. Since the winter urban dwelling in Samarkand, like in most other places of Central Asia, was preferably made facing south, this plan scheme provided the best heating for it by the sun in winter, which was not hindered by the ayvan located on the side. More typical for most cities were houses with a courtyard, which was used to cultivate a vineyard that created a solid green canopy. Giving coolness and at the same time brought a bountiful harvest of fruits.The tradition of improving residential buildings, especially guest houses, is very ancient. Almost in all two-row frame houses of the Uzbeks along the walls there were rectangular or arched portal niches, in which various household utensils, dishes and bedding were placed. 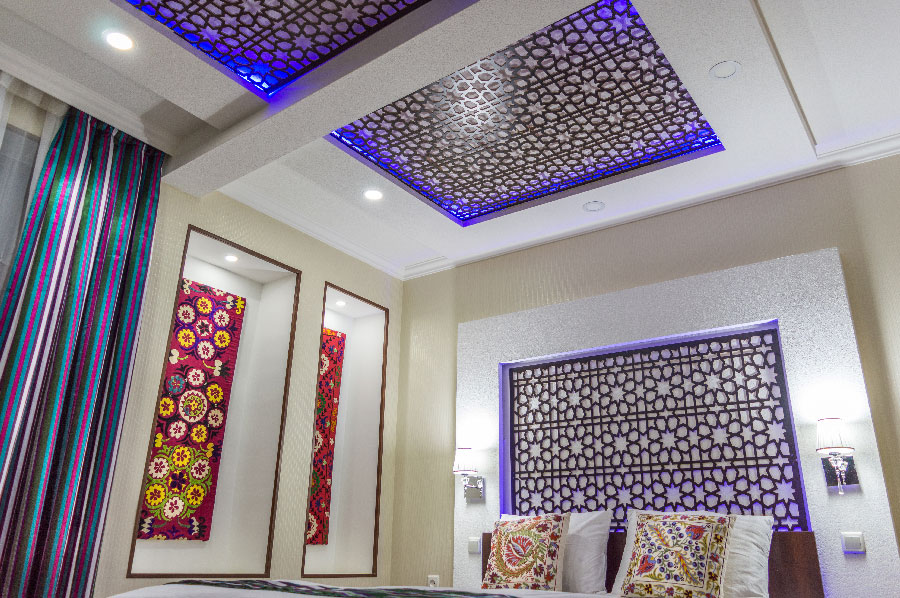 Decoration of the rooms

Decoration of the Houses

Uzbek families traditionally attached great importance to the decoration of living quarters. Usually, if the floor was earthen, it was covered with a mat, and on top - with a felt mat, carpet or rug, on which narrow quilts (kurpacha) were spread along the wall for sitting, especially when guests were received. Usually kurpachi were folded on a chest or in wall niches in the living room. And in the middle, a tablecloth with all kinds of dishes, fruits, sweets and always freshly baked cakes was spread out in front of the guests. Colorfully embroidered pillows (bolish) were laid out to the cotton mats (kurpacha) in the living room for reclining, and the chests with kurpachas were covered with richly embroidered suzane. Now in our rooms, these niches have also been used for both decorative and functional purposes. For example, in some rooms they contain decorative "suzane" embroidery in others like shelves with hangers or a wardrobe

We were hosted late at evening and even get some discount after bargain. The hotel situated at the historical part of the city. Registan and the Supermarket quite close to the hotel.

Good location at walking distance of the Registan. We got a 4 bed room even though we're a couple, but more important it was clean. Very clean and got cleaned every day

Jahongir Hotel is in an excellent location in the old city of Samarkand, 500 metres from the Registan and a short walking distance to other important sites including Bibi-Khanum mosque, Gur-Emir Mausoleum, Shahi-i-Zinda mausoleums.The hotel has 2 main garden areas..